Title: A novel model of atherosclerosis in mice 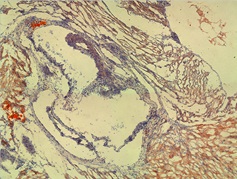 Figure shows an area of foam cells in the wall of the sinus containing lipid staining in mice receiving two gavages of PCB-77 and one gavage of bacteria.